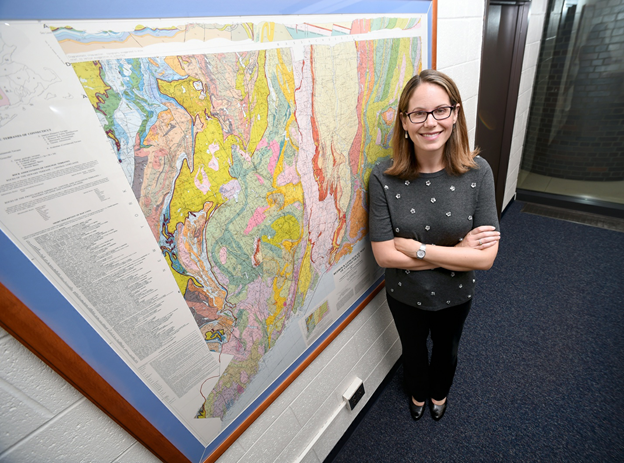 Maureen D. Long, Professor of Earth and Planetary Sciences, Yale University. (Arnold Gold / Hearst Connecticut Media)
This year due to the COVID-19 pandemic we will be holding our annual meeting online. Please join us for informal conversations about the state of the geosciences, a lecture by Dr. Marueen Long, Yale University, entitled “What lies beneath Connecticut’s geology? New images of the crust and mantle lithosphere from the SEISConn experiment” and our annual business meeting.
​
WHERE:
A meeting link will be emailed out to registered participants the week before the event.

TALK:
“What lies beneath Connecticut’s geology? New images of the crust and mantle lithosphere from the SEISConn experiment”

What lies beneath Connecticut’s geology? The bedrock geology of Connecticut is extraordinary in its complexity, which reflects a range of fundamental plate tectonic processes that have affected eastern North America over geologic time. These processes include supercontinental formation and breakup, the accretion of new landmasses onto the continental edge, and volcanic activity due to subduction and continental rifting. Connecticut’s geology reflects several phases of mountain building and terrane accretion during the formation of the Appalachian mountains and the Pangea supercontinent, as well as the later breakup of Pangea. A key unanswered question, however, is how these plate tectonic processes have shaped the deep structure of the crust and mantle lithosphere over geologic time. In this talk I will discuss results from the SEISConn experiment, a deployment of 15 broadband seismometers in a dense linear array across northern Connecticut. We use recordings of seismic waves from distant earthquakes to image the crust and upper mantle beneath southern New England. Images of the deep structure can address fundamental questions about how supercontinents are formed and break up, as well as how plate tectonic processes such as subduction, rifting, and terrane accretion affect the evolution of the crust and uppermost mantle. Furthermore, these images can help us to refine our models for how the various phases of Appalachian orogenesis and the rifting associated with the breakup of Pangea have shaped the bedrock geology of Connecticut.
REGISTER NOW!